Cannabis Ice Cream: Ben And Jerry's is about to launch the first CBD oil-infused ice cream 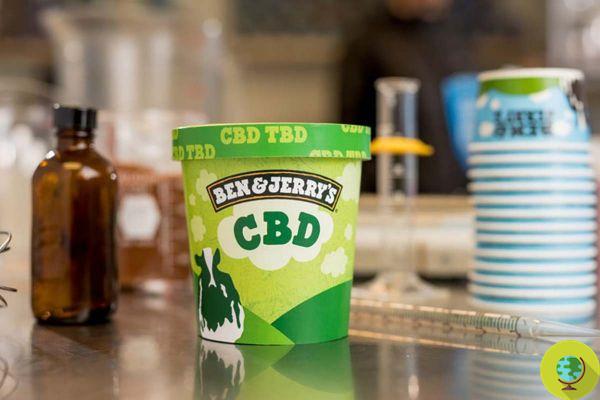 It seems that cannabis, and the products derived from it, are currently a hot topic all over the world. In the US, an ice cream with Cannabidiol (CBD) is ready to be launched but the original flavor is currently on standby as it is not legal

It seems that cannabis, and the products derived from it, are currently a hot topic all over the world. In the US it is ready to be launched an ice cream with Cannabidiol (CBD) but the original taste is currently on standby as it is not legal.

It's not actually the first time a cannabis ice cream (we told you, for example, about the loose one, made by an ice cream parlor in Alassio), but this time it is a cup of packaged ice cream, produced by the famous American ice-cream company.

The idea came from Ben & Jerry's, a brand known for having already created extravagant and imaginative flavors and which has now announced that it is ready to add to its catalog an ice cream infused with CBD, a chemical compound deriving from the cannabis plant that unlike of tetrahydrocannabinol (THC), however, is not psychoactive.

But there is a small problem: the company cannot sell cannabis ice cream because it is illegal.

In fact, the United States Food and Drug Administatration (FDA) currently prohibits the use of CBD oil in food or drinks. But that could change today, May 31, given that it will take place a public hearing on legalization and the company hopes to have approval to officially launch its new product.

Among other things, Ben & Jerry's tried to encourage FDA clearance by submitting its own comment in support of legalization and urging its consumers to do the same during the public consultation period on the subject.

The regulator said, in fact, it intended to use public comments to inform a federal working group intent on "exploring potential pathways for CBD-containing dietary supplements and / or conventional foods to be legitimately marketed."


The company has undoubtedly taken into account the market trends and claims to want to produce the new flavor to the delight of its loyal customers who, in this way, will be able to find a very original CBD ice cream in their freezer.

But is the hoped-for change in the US really on the horizon?

add a comment of Cannabis Ice Cream: Ben And Jerry's is about to launch the first CBD oil-infused ice cream