Butchers invite you to eat meat to save plants, an old rhetoric that doesn't even make you laugh 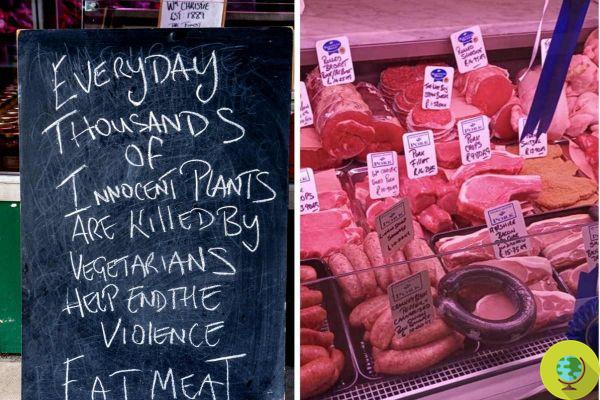 Butcher's in Edinburgh launches a sad marketing gimmick in favor of meat, arousing the ire of vegans and vegetarians

“Thousands of innocent plants are killed by vegetarians every day. Help end the violence. Eat meat ": this is the absurd phrase that appeared a few days ago on a blackboard positioned at the entrance of a historic butcher's Edinburgh. A marketing gimmick launched in the month of Veganuary (the largest vegan initiative in the world that inspires people to try a 100% plant-based diet in January).


As you can imagine, the photo of the cartel bounced on social media and aroused the indignation of local residents, especially those who follow a vegan or vegetarian diet.

Posted by The Edinburgh Reporter on Monday, January 10, 2022

“I think it's nonsense, I don't understand how they can justify killing an animal in this way - commented a 22-year-old student to the microphones of Edinburgh Live - It just creates anger and controversy and I don't find it funny. Certainly eating plants is less harmful to the environment and plants, unlike animals. They are not sentient ”.

In short, it is just an unfortunate marketing strategy in order not to blame those who eat animals and continue to defend the meat industry, which in addition to causing stress and suffering to animals is one of the main causes of pollution.

"People will cling to all sorts of nonsense to justify killing animals, which have exactly the same desires as us: to be happy, safe and free from suffering," said Kevin Thomson, interviewed by the Edinburgh Live newspaper.

Read also: Eating less meat would save the lives of 75 people a year. Confirmation in a new study

The butcher defends itself in this way

For his part, Mr. Willie - who runs the macelleria C.W. Christie Butchers together with his brother - he said he was amused by the reactions and grateful for the free publicity for the activity:

Since the Veganuary initiative exists, can't Meatanuary be launched too? - he replied - In any case it was just a simple joke. People took it badly. We are surrounded by people who tell us to become vegan and vegetarian, yet my business is a butcher. We sell meat and I am promoting my business. Everyone has a right to their opinion and respect it, I'm just expressing mine. And it seems to have worked, given the attention my butchers have gotten.

It may be a joke, but we find it in bad taste and disrespectful. And no, it doesn't make us laugh at all.

add a comment of Butchers invite you to eat meat to save plants, an old rhetoric that doesn't even make you laugh