Buckwheat seeds: properties, uses and where to find the "black wheat" 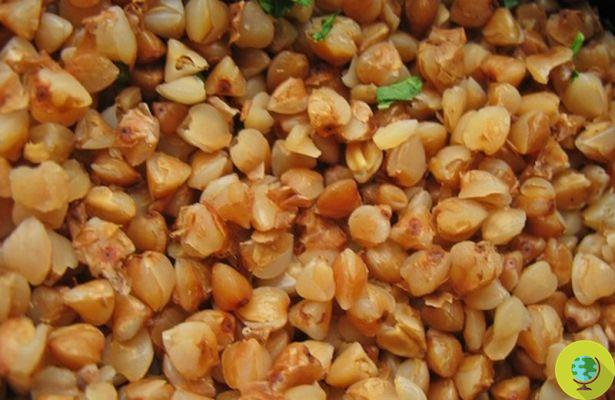 Buckwheat seeds are obtained from a plant of Asian origin. Their properties are thousand and their food uses are remarkable, so much so that many count buckwheat seeds among cereals. But not everyone knows that, instead, it is an annual herbaceous plant belonging to the Polygonaceae family

I buckwheat seeds are obtained from a plant of Asian origin. Their properties are thousand and their food uses are remarkable, so much so that many include the buckwheat seeds among cereals. But not everyone knows that, instead, it is an annual herbaceous plant belonging to the family of Polygonaceae.

The seeds have a triangular shape and are dark brown. Precisely for this reason, buckwheat is also called black grain and with it a flour for food use is made which has the important characteristic of not containing gluten.

The properties of buckwheat

For celiacs. In its protein composition, buckwheat it does not have gluten gliadins. This means that it can be used in all foods suitable for people with celiac disease. Buckwheat is great forintestine and for the heart, because it contains few fatty acids as well as having a detoxifying action. Buckwheat seed is mainly composed of starch, respectively 25% amylose and 75% amylopectin, thanks to which it is easily digested.

Rich in proteins and vitamins (B1, B2, niacin (PP) and B5), buckwheat seeds also boast a high quantity of mineral salts such as iron, phosphorus, copper, zinc, selenium and potassium, while a precious component, both of the seed and of the vegetable part, is represented by antioxidants.

Blood circulation. Among the antioxidants, fundamental are the tannins and routine (concentrated in the leaf). Routine is capable of strengthen the capillary wall and prevent the appearance of bleeding, improving the microcirculation also thanks to its anti-inflammatory and antioxidant properties. In natural medicine, buckwheat seeds are used for decoctions o wraps to promote blood circulation. In case of bruises or bruises, make a pack of seeds and water, able to conserve heat and humidity.

Stress and exhaustion. Buckwheat provides energy and "vigor" and therefore can be used by sportspeople and the elderly, pregnant and lactating women.
The decoction of buckwheat seeds is indicated in case of lack of concentration and to alleviate the symptoms of fatigue and gastritis and to normalize the production of gastric juices. Hot packs with buckwheat they also reduce intestinal spasms, they calm the nervous contractions of the intestine and the pains caused by menstruation.

Buckwheat for the skin. The buckwheat flour used in the shower as a shower gel leaves the skin very soft and with a very good smell. Wheat flour can also be used together with vegetable and essential oils.

Buckwheat is a potential allergenic, and not just for men. Buckwheat, in fact, can be used as forage but its abundant consumption can cause the so-called buckwheat poisoning or phagopyrism. The symptoms of this intoxication appear on the animal only after exposure to the sun, with a redness of the hairless parts (udders, eyelids, ears and lips) and the appearance of blisters and dark crusts (in the most serious cases intoxication buckwheat can produce bacterial infection and necrosis).

Where is buckwheat found

Il buckwheat it is found in the form of flour or grains in natural or organic food stores. If you prefer to buy the grains, wash them carefully under running water and drain them well, then toast them in a pan for a couple of minutes before boiling as is done for normal cereals.

Gluten-free sourdough: how to prepare it and how to store it

Watermelon seeds: 10 recipes and ideas to use them in the kitchen and in creative recycling ❯

add a comment of Buckwheat seeds: properties, uses and where to find the "black wheat"