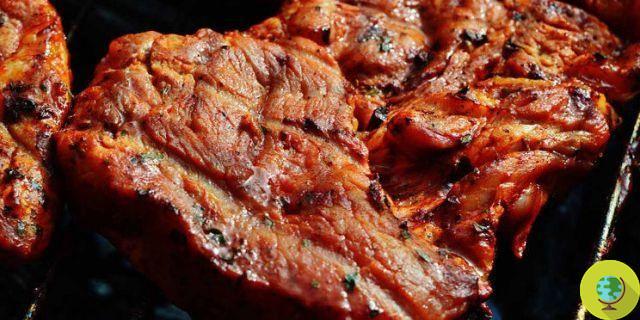 Some research has analyzed the relationship between red meat and the onset of breast cancer as well as the presence or absence of numerous moles on the body and an increased risk of contracting this disease.

New interesting research wants to shed light on the onset of breast cancer or better on possible risk factors. The first concerns the relationship with the Red meat, two others analyze the possibility that the presence of moles on the skin carries a few more chances of developing the disease.


According to research carried out by Harvard University, and published in the British Medical Journal, excessive consumption of Red meat is undoubtedly a risk factor for breast cancer not to underestimate, especially if young women eat it. The team of American experts analyzed the results of a previous research carried out in 1991 in which a total of over 88 women between 26 and 45 years of age had filled out a questionnaire on their eating habits. Among them there were those who never consumed red meat, those who consumed it moderately and those who used to consume it several times a day.

It was thus possible to highlight through a statistical projection (which also analyzed other factors) that, in the following 20 years, it was precisely the women who ate more meat who had more cases of cancer. Higher red meat intake corresponded to an overall 22% risk increase, particular incidence of this phenomenon was noted in young women, or in those pre-menopause.

Scientists speculate that the harmful effects of excessive consumption of red meat regarding the increased risk of breast cancer would be due to the excessive amount of protein, these substances in fact accelerate cell duplication and therefore also that of cancer cells. In addition, some substances such as i nitrates, potentially carcinogenic.

The doctor Maryam S Farvid, lead author of the study, concluded that this food "may be a risk factor for breast cancer, and replacing red meat with a combination of legumes, poultry, nuts and fish can reduce the risk of breast cancer."

For i nei instead, we report two studies carried out on middle-aged women that found the presence of a greater number of moles on the skin also results in an increased risk of breast cancer. The first analyzed data from a previous statistical study that took (in 1987) a sample of over 74 American women between the ages of 40 and 65 who were asked to count the moles they had on their left arm with a diameter of over 3 millimeters. It was thus noted, after many years, that women with more than 15 moles in that area had a 35% more chance of getting breast cancer than women without moles.

The second analysis, on the other hand, was conducted by Inserm, the French national institute for health and medical research, and evaluated the data of a study carried out in the years 1989-1991 on about 90.000 women between the ages of 39 and 66. years. Women were asked to indicate whether they had any, few, many or very many moles on their bodies. The sample was monitored until 2008 and over the years 5.956 had fallen ill with breast cancer. It was thus seen that the women who had more moles they were also what they measured a 13% higher risk of breast cancer.

These two researches therefore suggest that the presence of many moles on the body can be considered a useful indicator for assessing a higher risk of breast cancer. The hypothesis of the experts is that the moles are a marker of sex hormone exposure, in particular estrogens whose participation in the onset of breast cancer is now recognized.

Breast cancer: 17 chemicals to avoid and 7 ways to protect yourself

- Breast cancer: it is prevented by walking and eating healthy