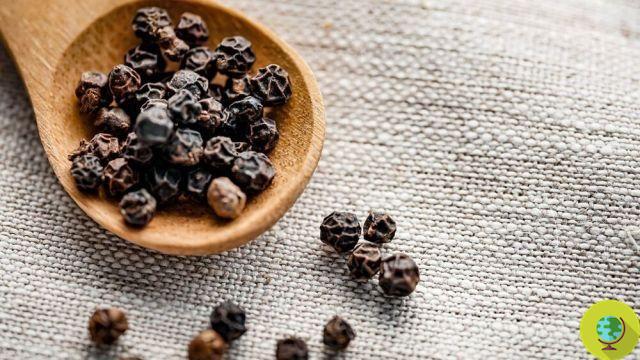 One of the chemical compounds in black pepper could reduce the harmful effects of a high-fat diet and fight obesity.

Black pepper to fight obesity? Stimulating the metabolism and having antiseptic, purifying and expectorant properties, black pepper would also be able to burn more calories and therefore counteract the accumulation of fat.

The piperonal could, in essence, counteract some of the genes associated with severe overweight and the aim of this investigation was precisely to study the anti-hyperlipidemic and antiobesity effects of piperonals.

What is black pepper and its properties

Black pepper (Piper nigrum) is a well known spice, rich in a variety of bioactive compounds and widely used in many cuisines around the world. In traditional Indian medicine systems, it is used to treat gastric and respiratory ailments.

Black pepper is obtained by blanching the unripe fruits of the plant known as Piper nigrum for a few minutes in hot water and then putting them to dry in the sun for a few days, in order to make their appearance and color darker.

Used without exaggeration, it is a spice that can also offer several benefits to our health. Its active ingredient, “piperine”, is a substance capable of stimulating metabolism and thermogenesis, thus helping to burn more calories. In addition, black pepper has important digestive powers and, according to a study, when combined with turmeric, it is able to prevent the growth of breast cancer cells.

Finally, black pepper - always if taken in limited quantities - has antiseptic, purifying, analgesic and expectorant properties, increases sweating and stimulates the production of endorphins, so it can also be considered a natural antidepressant.

The study by Indian researchers confirmed that the piperonal contained in black pepper introduced in a diet is able to increase lean mass, density and bone mineral concentration and reduce blood glucose levels. And that would have led to a drastic reduction in obesity.

And according to experts, that substance may have helped regulate some of the genes associated with obesity. "Our results - they explain in Nutrition and Metabolism - demonstrate the effectiveness of piperonal as a powerful anti-obesity agent, provide scientific evidence for its traditional use and suggest the possible mechanism of action".

That said, you can use black pepper as you like, but sparingly. In the kitchen it really lends itself to the most varied combinations: from pasta to cheese, passing through fish, vegetables and even chocolate and dried fruit. In any case, remember that black pepper is an irritating spice especially for the mucous membranes, so it is better to avoid its use if you suffer from ulcer, gastritis or hemorrhoids. Furthermore, it should be taken in moderation if you suffer from hypertension, while it is not recommended for children and the elderly.

The chili against obesity, helps to lose weight ❯