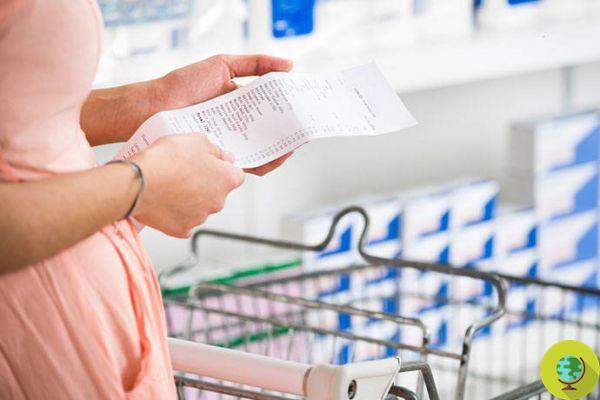 BPA, bisphenol A, is still found (albeit less so) in the receipts issued by American stores. A sample analysis carried out in the USA however highlights the increased presence of the less known, but equally dangerous, BPS (bisphenol S).

Il BPA, bisphenol A, is still found (albeit less so) in the receipts issued by American shops. A sample analysis carried out in the USA, however, highlights the increased presence of the lesser known, but equally dangerous, BPS (bisphenol S).


The analysis, part of the Healthy Stuff program at the Ecology Center in Ann Arbor, Michigan, looked at more than 200 paper receipts issued by 150 companies in order to assess the presence of chemicals that could interfere with the endocrine system. The activities included all kinds of shops: grocery stores, groceries, gas stations, restaurants, libraries, etc.

The researchers found that bisphenol S (BPS) replaced bisphenol A (BPA) as a chemical found in many receipts printed on thermal paper, although BPA still remains common although less commonly used.

Receipts were analyzed using FTIR spectroscopy. It was thus seen that BPS is present in 75% of the receipts analyzed while BPA is present in 18%. The research therefore shows a shift in the market towards BPS while only a small number of companies use alternative substances. The report found three retailers using non-thermal coated receipt paper and one retailer, Best Buy, using Pergafast 201, an alternative free of toxic phenolic chemicals, including BPS and BPA.

But why this transition from BPA to BPS? Simple, the producers have adapted to the demands of the market. Consumers, in fact, over the last few years have become aware of the presence of BPA in many objects of common use and of how this substance is accused of dangerous health effects (just think that in 2012 the FDA banned its use in baby bottles).

The producers then tried to find something that could easily replace it. The BPS was available and allowed companies to label products as "BPA-free". The trick was simply that the BPS had not been as well studied and therefore was not in the sights of legislators or consumers, therefore companies have chosen to use it without having a complete toxicological assessment.

In fact, according to Gillian Miller, Senior Scientist at the Ecology Center's Healthy Stuff Program, it is still a hormone disruptor with adverse effects on fetal development and reproductive health. Like BPA, BPS is also not chemically linked to the receipt and, once it comes into contact with the skin, it passes into the bloodstream within minutes.

Given this, it is clear that experts raise concerns that the substitution of BPA has taken place in favor of the equally dangerous BPS.

"It is vital that these toxic chemicals are removed from receipts so that consumers and cashiers are not constantly exposed to them."

The Ecology Center is therefore asking all retailers to switch to phenol-free receipt papers. Since they exist, we just have to use them!

You may also be interested in the dangers of the substances present in the receipts:

Parental bullying: how bullying is transmitted to children ❯