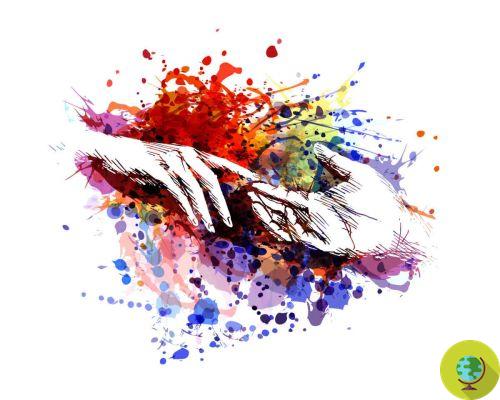 The stronger a friendship is, the more subjects will share the same brain wavelengths. Social relationships seen in the brain

You recognize two friends from afar: in addition to affection there is a special harmony; and the more they are, in their original way, on the same wavelength, the greater the bond that is perceived.


It is not just a romantic idea, an illusion of the senses, an empathic suggestion: so much so that, in the end, even science has shown it. In practice, it has been discovered that the brains of two very friendly people react exactly the same way, activate the same brain areas, show equal peaks and drops in attention, an identical elaboration of the reward mechanism and the experience of boredom.

In fact, scholars had long ago found, thanks to research, that closer social relationships, such as friendships, generally develop more easily between people who resemble each other for one or more characteristics such as age, race, religion, socioeconomic status, level of education, political orientation, optimism and so on. But now the data that emerge from the brain scans (of the subjects who participated in the study) provide new information, suggest a much deeper and "structural" link: under the test of facts, even on different topics, the neural response of two friends is in fact the same or in any case very similar, congruent.

"I was impressed by the extraordinary intensity of the similarity of the findings that is found between people who are friends," he said Carolyn Parkinson, of the University of California, who with colleagues Thalia Wheatley and Adam M. Kleinbaum of Dartmouth College, recently published his work "Similar neural responses predict friendship"In the scientific journal Kind Communications.

In short, friendship is something more than simple shared interests, much, much, much more than a contact or a thousand shares on social networks; it approaches - according to Nicholas Christakis, a biosociologist of Yale University - to a sort of "chemistry". As in love, as in any relationship.

From a "non-ordinary" point of view, this is obviously nothing new: on closer inspection, "chemistry" is the physical, practical, observable result of a connection, of a harmony that occurs or does not occur first at the soul level and of subtle bodies in general, which translates into a "recognition", in order to walk, share or not experiences in this life. This is why, again science, has shown how friendship while being "demanding" - that is, it requires dedicated time, thoughts and actions (as we read in the Little Prince: "it is the time that has been lost for a person that determines his importance ") - is necessary for well-being.

Those who have no friends (and this applies not only to humans but also to many non-human animal species) live badly, with negative effects on physical and emotional levels equal to those caused by situations such as unemployment, lack of physical activity, obesity, smoking. Not only that: a study by Dr. Christakis a couple of years ago showed that those with strong social ties (affections, friendships, established good relationships, networks of contacts) more easily have a low concentration of fibrinogen, a protein present in the chronic inflammation which is believed to favor the onset of many ailments.

And if scientific research is looking for a reason "in matter" to explain this result, on a symbolic, psychosomatic, spiritual level, the link is clear: inflammation reveals a state of suffering, of moving away from the nature of the Self, from one's own authentic purposes. of life. Friendship provides support in sharing, lightens the burden; supports, strengthens the beauty of the other, gives energy. It is no coincidence that it is one of the many modulations of love: the only nourishment and remedy - to be produced and received - which, looking at the essentials for the "heart", we really need.

add a comment of Best friends are the ones you share everything with, even your brain waves