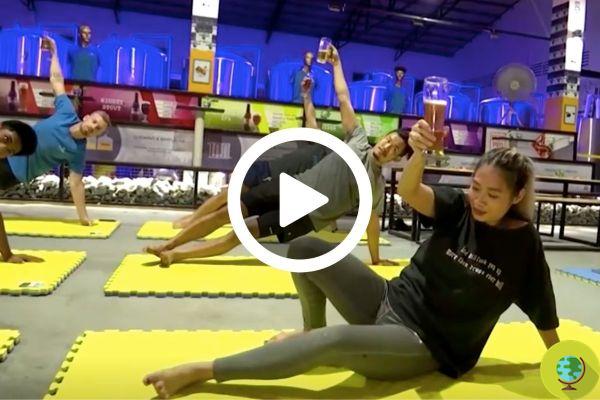 In Cambodia, after the lockdown, there are those who have decided to relax with an unusual activity: Beer Yoga, that is practicing yoga while drinking beer. The initiative was organized in the city of Phnom Penh by TwoBirds Craft Brewery, an Australian craft beer company, which exports its products to different parts of the world.

Beer Yoga, a variant of the classic Indian practice, combines traditional asanas with a bottle or glass of beer: the exercises are performed by sipping the hop-based drink from time to time.

According to those who support the discipline, this drink would help meditation, stimulate the intellect and favor the perception of a higher consciousness. However, many yoga purists do not find a link between psychophysical well-being and alcohol.

For some people, a post-quarantine group activity, which combines physical exercise with alcohol, is ideal for combating the stress generated by the pandemic.

According to Connor Cheney Kirsch, general manager of BeerPro Import Export Co., of which TwoBirds is a part, the business especially involves those who after work go out for a beer, but also want to get active in company.

Sreyline Bacha, 25, one of the attendees, commented:

I have more fun with Beer Yoga. It is not as serious as traditional yoga

Anna, the instructor of the course, however, specified:

It's not like a real yoga practice, it's more like a meeting with friends to which the yoga movements are added

add a comment of Beer Yoga, Yoga with beer to relieve the stress of the lockdown in Cambodia