Beer is good for the brain according to a new study 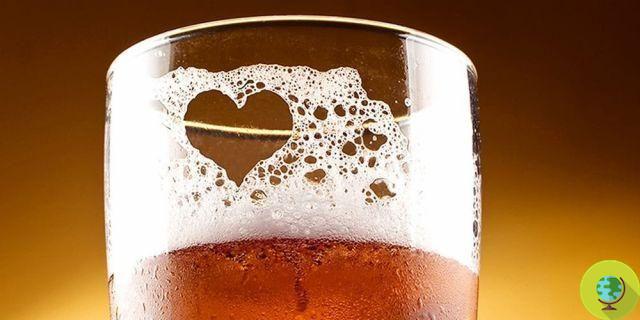 Can beer have beneficial properties for our body? Researchers have recently identified a possible link between the consumption of beer and the possibility that this drink may contain substances that can protect us from Alzheimer's.

Beer can have some beneficial properties for our body? Researchers have recently identified a possible link between the consumption of beer and the possibility that this drink may contain substances that can protect us from 'Alzheimer.


Researchers who are studying the properties of beer they certainly do not want to encourage the population to consume alcoholic beverages, but rather to understand whether from beer it is possible to obtain substances capable of preventing Alzheimer's or to be exploited, perhaps, for the production of drugs.

In fact, it is well known that the consumption of alcohol can cause damage to our body, for example in the liver.

The study in question was published in the scientific journal Alcoholism: Clinical and Experimental Research. The researchers refer to the possible correlation between a moderate consumption of beer and the appearance of brain plaques typical of Alzheimer's disease.

We take into account that at the moment the evaluations have taken into consideration only a small sample. In fact, the researchers evaluated the health data of 125 adult men who died between the ages of 35 and 70, entered in the Helsinki Sudden Death archive. The researchers interviewed the subjects' relatives to assess the alcohol consumption of the missing persons and analyzed the brain tissue of the deceased subjects to assess the presence of Alzheimer's-related plaques.

They estimated that drinking beer - and not other alcohol - could prevent Alzheimer's plaque formation, but this is only preliminary data, yet to be confirmed and that at the moment they only concern beer and not other spirits such as wine or liqueurs.

The hypothesis is that the protective action of beer could be related to its content of B vitamins, substances that are however present in numerous foods (and obviously not only in beer).

A previous study, on the other hand, had hypothesized that the silicon contained in the beer could prevent the harmful effects of aluminum buildup on brain health. However, silicon is not only contained in beer but above all in cereals, fruit and vegetables.

Ichnusa beer relaunches the returnable void: here is the new bottle with a green cap ❯