Because we don't like the new limited-edition, space-inspired Coca Cola 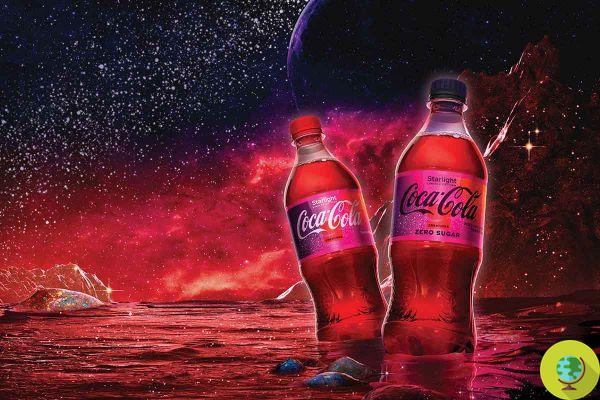 These days Coca Cola has announced the imminent launch of Starlight, a new limited edition drink dedicated to space. A marketing gimmick and nothing more, which the environment and all of us did not feel the need, quite the contrary.

The new Coca Cola Starlight, as revealed by the multinational that produces it, with its fresh taste and reddish hue "evokes the feeling of a cold journey into space". This new limited edition product will be available for the moment only in the United States, but could soon be launched in other countries as well.


In the US, Coca Cola seems to be no longer satisfied with the success of its "traditional" drinks and has been launching new products for some time, such as cherry or vanilla flavored Coca Cola. Now to these is also added Starlight, the first product launched as part of the company's new Coca-Cola Creations platform.

Set to hit store shelves in the US starting Monday (with some countries following in the coming months), Coca Cola Starlight highlights the brand's history in space.

Thirty-five years ago, Coca-Cola teamed up with NASA to become one of the first sodas to travel into space. That same passion for space still exists today. With Coca-Cola Starlight, we wanted to celebrate the extraordinary ability of space exploration to inspire generations to discover new worlds of infinite possibilities.

Even the bottles and cans of Coca Cola Starlight recall the space with a design characterized by a multidimensional and light-filled star field.

Unlike "vanilla" and "cherry", the flavor of the new drink is not clear. It seems to resemble raspberry in some way. In the launch release, the company writes that it "combines the great taste of Coca-Cola with a hint of the unexpected" and that it includes "notes reminiscent of stargazing around a campfire, as well as a feeling of freshness that it evokes the sensation of a cold journey into space “.

A reporter who has already tasted it in a sugar-free version wrote:

The drink didn't taste like space travel or sitting around a bonfire. However, it tasted like a sweeter version of Coke. And it's definitely red.

Coca-Cola Starlight will be available from next Monday in US supermarkets and stores in single 20-ounce bottles and packs of 10 mini-7,5-ounce cans in both “Original Taste” and “Zero Sugar” options. Later this year, Coca-Cola plans to introduce additional limited edition Coca-Cola Creations.

The launch of drinks like these is none other than that a marketing strategy aimed at "catching" new customers, especially young ones. Campaigns like this are essential because, even if it doesn't seem like it, interest in soft drinks has been waning for years and mystery and limited edition products like this can be an effective way to grab the attention of potential new customers.

A marketing gimmick, among other things harmful to the environment (other plastic bottles and cans will be produced, consumed and then thrown) and which we sincerely did not feel the need, also considering that Coca Cola is a drink full of sugars. (or certainly not healthy ingredients even in version O) that those who follow a healthy diet try to avoid as much as possible.

Why you should never have breakfast too late, according to the nutritionist ❯