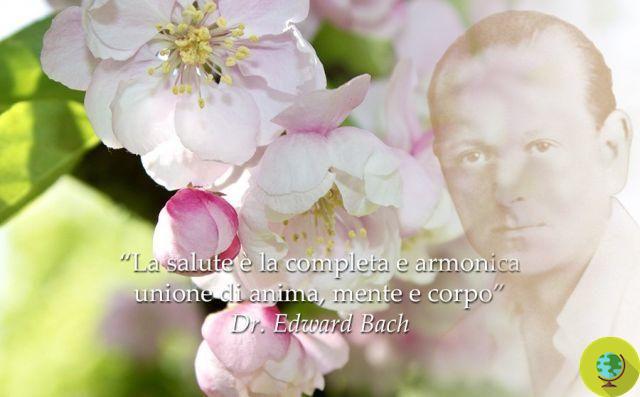 Bach flowers are the set of flower essences proposed by Doctor Bach as natural remedies to face the difficulties of life. Bach flowers are attributed positive effects on the emotional and mental state. They can be useful for both physical and psychological ailments.


I Bach Flowers are the set of flower essences proposed by Doctor Bach as natural remedies to face the difficulties of life. Bach flowers are attributed positive effects on the emotional and mental state. They can be useful for both physical and psychological ailments.

Doctor Bach devised these remedies to be easy to use without necessarily having to go to a doctor. For each person, according to their experience, and for each type of problem or situation to be faced, there is a specific Bach Flower.

Usually Bach flowers they are easily found both in herbalist's shops and in pharmacies. They are also known as Bach flower remedies. At the basis of Bach's herbal medicine we find the principle according to which in the treatment of a person personality, emotions and moods must be taken into account, on which the physical symptoms depend. The physical disturbance would originate at a much deeper level than the bodily one, that is, in the emotional sphere.

These flower remedies they were born from an intuition of Dr. Edward Bach, who was born in 1886 in Moseley, a few miles from Birmingham, England. Working in the hospital he realized that Western medicine only took into account the disease without taking into consideration the complexity of the person. After leaving the profession of surgeon, he began to deal with bacteriology and immunology. He continues to engage as a doctor and in scientific research and at the same time he realizes that he has the skills of a pranotherapist.

In 1936 he wrote and published the book "The Twelve healers and other remedies". Before dying, he instructs his assistants on his discoveries and on the knowledge acquired during his studies and research, so that Bach's flower remedies can become within everyone's reach.

The 38 Bach flowers divided into 7 groups with their properties

Rock Rose: it helps when fear is paralyzing, when you feel a real terror that prevents you from moving and thinking clearly.

Mimulus: it helps when fear is related to something specific, such as fear of spiders, fear of being alone, of losing your job or of illness, fear of others and shyness.

Cherry Plum: for those who fear losing control of their thoughts and actions, to the point of doing something bad or wrong; this Bach flower helps to have the courage to follow their own path.

Aspen: it helps when you feel fear without knowing why, when the fear is vague and inexplicable and could backfire on those who feel it.

Red Chestnut: it helps when you feel anxious about others and are afraid that unfortunate events might happen to loved ones.

Ceratus: it helps to have confidence in one's own judgment when making a decision.

Slceranthus: helps in times when it is difficult to choose between two well-defined possibilities; practical example: when you have to choose between a Mexican or Japanese restaurant, not being able to go to both in the same evening.

Fiber: it helps when you feel great despair and have given up believing in your own abilities.

Hornbeam: it helps when you feel you don't have enough mental or physical strength to bear the burdens and difficulties of life.

Wild Oat: it helps when you are at a crossroads in life and are unsure which direction to take.

Bach flowers to live in the present

Clematis: for those who find their life unhappy and take refuge in fantastic worlds; it teaches to establish a bridge between the physical world and the world of ideas and can foster great creativity, it is also used to bring clarity and attention to the present moment.

Honeysuckle: it helps to let go of past experiences or events when your thoughts are in the past rather than the present.

WildRose: it helps to take responsibility for one's life and to regain interest in everyday life, for one's work and for the world in general.

Olive: it helps to regain energy, vitality and interest in life.

White Chestnut: it helps when your mind is cluttered with thoughts you don't want to have.

Mustard: it helps when one suddenly feels depressed for no reason, as if a dark cloud destroys normal happiness and cheerfulness.

Chestnut Bud: it helps to avoid repeating the same mistake over and over, based on one's life experience.

Bach flowers for those suffering from loneliness

Water Violet: allows you to get a more open and warm relationship with other people; for those who love to be alone, but at the same time suffer from loneliness at the same time.

Impatiens: for those who think and act in a hurry and have no patience with the slowness of others, for those who often prefer to work alone; teaches patience towards others, understanding and empathy. Helps relieve an impatient attitude and reduce stress.

Heather: it helps when you are unhappy in being alone for a certain period of time and you are therefore always looking for the company of people to talk to about your problems, no matter who they are.

Bach flowers for those who let themselves be influenced by others

Agrimony: it helps to communicate one's true feelings and concerns, it is useful for those who hide their feelings behind a mask of joy.

Centaury: it helps when it is difficult to say no, when one too often finds oneself serving others by neglecting one's personal mission in life.

Walnut: it helps to break old bonds in times of great life change and protects against external influences.

Bach flowers for despair and despair

Larch: it helps to regain self-esteem and self-confidence.

Pine: it helps when feeling guilt and remorse.

Elm: useful when too many responsibilities overwhelm you, when you feel depressed and unhappy, when you risk losing self-esteem.

Sweet Chestnut: it helps you in the moments in which you feel too great anguish, which seem unbearable, when the mind and the body have reached the extreme limit of endurance.

Star of Bethlehem: it helps when trauma occurs, serious news is received, the loss of a person home, fear occurs following an accident and when suffering and unhappiness seem unbearable.

Read also: Star of Bethlehem: the Bach flower to face large or small, present or past traumas

Willow: it helps when you suffer from hard-to-accept adversity, feel sorry for yourself, grumble and sulk.

Oak: it helps when inner strength decreases, for example due to overwork and when you tend to ignore fatigue for a long time.

Crab Apple: it helps when you feel that something is wrong from a cleanliness and personal hygiene standpoint, for example when you wash your hands too often for no reason.

Bach flowers for those who have difficulties in relationships with others

Chicory: it helps to be less critical, opinionated and argumentative.

Fine: it helps to respect other people's points of view and ideas and who tends to convince others to do things their own way.

Beech: it helps to be less critical of others and to accept them as they are.

Rock Water: it helps when you expect too much of yourself.

Bach's 39th rinedio is called Rescue Remedy, also known Universal Remedy. It is outside the 7 categories mentioned above. It is actually a single composition that includes 5 flower essences: Clematis, Cherry Bloom, Impatiens, Rock Rose and Star of Bethlehem. It is mainly used in emergencies, for physical and / or emotional shocks, accidents and great scares, but also before a difficult event to deal with, such as an exam or a public speech. It is both an emergency remedy and a preventative remedy.

Rosemary Flowers: You may not know but they are edible! All the uses you don't expect ❯