Artificial sweeteners make you fat and increase the risk of diabetes 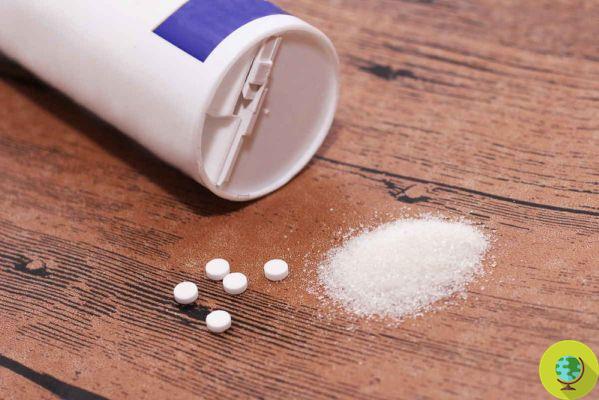 People who use low calorie sweeteners are more likely to put on weight, just the opposite of what is expected.

People who use sweeteners to limit their sugar intake and not gain weight actually experience the opposite effect - they gain weight. Not only that, taking sweeteners also increases the risk of developing type 2 diabetes.


This is revealed by a review of studies carried out by researchers at the University of South Australia, according to which people who use low calorie sweeteners (LCS) are more likely to gain weight, exactly the opposite of what consumers expect.

In short, artificial sweeteners, ie those low-calorie sweeteners used in place of sucrose, glucose and fructose, with an intense sweet taste "without calories", not only have no guarantee of safety, but would also make you gain weight.

Over the past 20 years there has been a 200% increase in CSF use among children and a 54% increase among adults. Based on this assumption, Professor Peter Clifton - who led the research - and his team reviewed a number of investigations, including a seven-year US study of 5158 adults that had discovered how those who consumed large amounts of artificial sweeteners gained weight compared to non-users.

“Consumers of artificial sweeteners do not reduce their overall sugar intake. They use both sugar and low calorie sweeteners and may psychologically think they can indulge in their favorite foods. In addition, artificial sweeteners also change intestinal bacteria which can lead to weight gain and the risk of type 2 diabetes, ”they explain.

Likewise, also the artificially sweetened beverages are linked to an increased risk of death and cardiovascular disease and stroke and dementia among older people, but it is not clear why.

Finally, Professor Clifton cites 13 studies that analyzed the effects of drinking artificially sweetened beverages on the risk of type 2 diabetes, which found no link or positive. Among them, one study pointed out that replacing those drinks with sugary drinks or fruit juices was associated with a 5-7% lower risk of type 2 diabetes.

“The best option for low-calorie sweeteners is to stick to a healthy diet, which includes lots of whole grains, legumes, vegetables and fruits and water,” concludes Clifton.

In any case, if you have decided to limit or eliminate sugar (whether it is white or cane), we recommend that you replace it with truly natural sweeteners.