Vegan apple pie. Apple pie is probably one of the most popular traditional sweets for both adults and children. Its homemade preparation allows you to have an unpackaged and industrial dessert suitable for both a snack and breakfast. It can easily be prepared in a vegan version. Adding almonds will enrich the flavor even more. Here are the ingredients and the procedure for making a vegan apple pie.

La apple pie it is probably one of the most popular traditional sweets for both adults and children. Its home preparation allows you to have an unpackaged and industrial dessert suitable for both a snack and a breakfast.

It can be easily prepared in vegan version. Adding almonds will enrich the flavor even more. Here are the ingredients and the procedure to make one vegan apple pie.

In a large bowl, combine the almond milk and the corn oil. Emulsify them with a whisk. Pour in the sugar, cinnamon and vanilla powder and mix everything together. Add the chopped almonds and the two flours little by little, continuing to mix with a whisk or a spoon so that no lumps form. You can add a little flour or almond milk to adjust the consistency of the dough.

Peel two of the apples and form some rather thick slices, to be incorporated into the dough after adding the yeast and a pinch of salt and having mixed everything very well. At this point you will have to grease with a little oil and flour a round cake pan so that you can easily take out the apple pie once it's ready.

You can then pour the apple pie mixture into the pan. Shortly before or immediately after this operation, peel the remaining apple and cut it into thin slices, so that you can decorate the surface of the cake. You can complete the decoration by adding whole almonds. 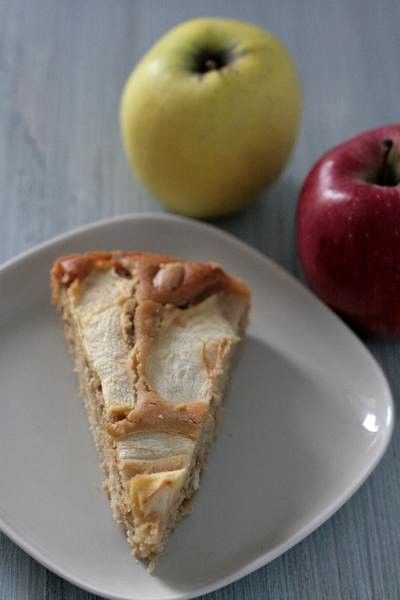 Bake the apple pie in the oven for 45 minutes at 180 ° C, doing the classic toothpick test before taking the cake out of the oven, which must be left to cool before being removed from the mold. Brown sugar can be replaced by corn malt in the same amount. The almond milk necessary for the preparation of the recipe may be homemade blending 30 grams of almonds and 310 ml of water in a blender, finally filtering the drink with a colander.

Vegan desserts: 6 biscuit and cake recipes all to be baked

add a comment of Apple pie: the vegan recipe