Antibiotic Resistance: An ingredient used in soaps and toothpastes allegedly

Antibiotic resistance, a problem that could become very relevant in the near future and that puts the world population at risk. A disinfectant found in many commonly used products is now also being blamed: especially soaps, toothpastes and cleaning products.

Antibiotic resistance, a problem that could become very relevant in the near future and that puts the world population at risk. Now under indictment too a disinfectant found in several commonly used products: especially soaps, toothpastes and cleaning products.


Let's talk about triclosan, a widely used antibacterial which is even found in some children's toys. A team of British researchers who have recently discovered a link between an important mechanism of antibiotic resistance and resistance to triclosan are putting him under fire.

The research, conducted at the University of Birmingham Institute of Microbiology and Infection in collaboration with the Quadram Institute and the John Innes Centerche, he studied the resistance mechanisms of bacteria through the phenomenon known as “cross-resistance”. Cross-resistance is a term used to indicate how exposure to a substance can cause bacteria to become immune to even similar substances with which they have never been in contact before.

The study noted how bacteria that mutated to become resistant to quinolones (antibiotic drugs) also became resistant to triclosan. This group of antibiotics is very important for treating urinary tract and lung infections, for example, and the new discovery raises concerns that the action is also valid in reverse and that therefore the use of triclosan may trigger antimicrobial resistance. As Dr Mark Webber, of the Quadram Institute and Honorary Lecturer at the University of Birmingham, said:

“The concern is that this could happen in reverse and exposure to triclosan may encourage the growth of antibiotic-resistant strains. We have found that this can happen for E. coli. While we are running out of effective drugs, understanding how antibiotic resistance can occur and under what conditions is essential to stop the selection of the most resistant bacteria ”.

The warning comes just a year after that the use of triclosan in antibacterial soaps has been banned in the US dalla US Food and Drug Administration (FDA). 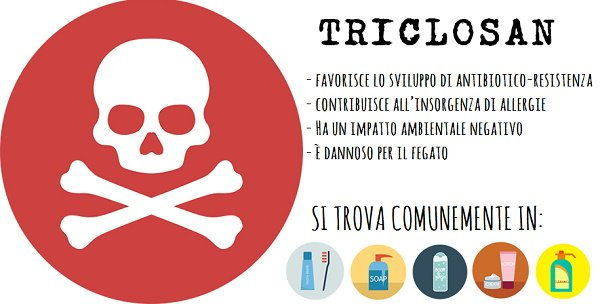 The Triclosan is an "active" ingredient in many soaps and cleaning products which boasts antibacterial and antifungal properties. However, the FDA banned the chemical from some consumer products after research revealed it was no more effective than hot water and regular soap at killing germs and bacteria. Despite this, triclosan is still found in many household products and even in children's toys.

In our own small way we can avoid buying cleaning and hygiene products that contain chemical ingredients of dubious effect. We always choose ecological variants and with good inci!

Alternating nostril breathing: the benefits and how to practice it ❯

add a comment of Antibiotic Resistance: An ingredient used in soaps and toothpastes allegedly