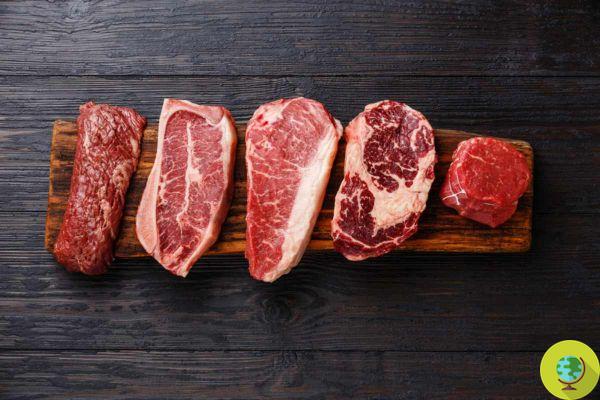 Changing your meat eating habits means a longer life: one less serving of red meat per day fights the risk of early death.


Meanwhile, according to new research conducted at Harvard TH Chan School of Public Health, the Reduction in red meat and the corresponding increase in healthy alternative food choices over time is associated with lower mortality.

It has long been known that a high consumption of red meats and sausages is the cause of greater risks of many chronic diseases, such as type 2 diabetes, cardiovascular disorders and even some types of cancer. Now this is the first longitudinal study aimed at examining how changes in the consumption of red meat over time can affect health considerably.

For this study, the researchers used health data from 53.553 women and 27.916 men without cardiovascular disease or cancer. They then examined whether changes in red meat consumption from 1986-1994 predicted mortality over the period 1994-2002 and whether the changes from 1994 to 2002 predicted mortality over the period 2002-2010. Following them for 16 years, therefore, in the first 8 they collected information on people, in the remaining 8 they analyzed the impact their habits had had on their health conditions.

The results showed that people who had increased their consumption of red or processed meat by only half a serving per day in the second 8 years had seen their chances of premature death increase by 10%. On the other hand, those who had replaced meat with other types of protein sources had seen different survival rates: 17% less for those who had chosen fish; 10% for those who preferred skinless chicken or vegetables; 8% with the choice of the egg; 12% when replaced with a whole grain dish.

Researchers also found significant associations between increased red meat consumption and increased deaths due to cardiovascular disease, respiratory disease and neurodegenerative disease, regardless of the age of the participants, the quality of their diets, the physical activity, alcohol consumption or whether or not they were smokers.

Why does it hurt so bad? According to the researchers, the association between red meat consumption and increased risk of death may be due to a combination of components that promote cardiometabolic disorders, such as saturated fat, cholesterol, hemic iron (the iron bound to hemoglobin), preservatives and compounds. carcinogens produced by high temperature cooking.

This long-term study provides further evidence that reducing red meat intake while eating other protein foods or more whole grains and vegetables can reduce the risk of premature death. To improve both human health and environmental sustainability, it is important to adopt a Mediterranean diet or another diet that focuses on healthy plant foods, ”explains senior author Frank Hu.

The solution? Let's eat as little red meat as possible and allow ourselves decidedly different protein choices that are good for us and that don't even harm the environment. Just a change towards one  alternative protein source and consuming healthy plant foods such as vegetables or whole grains can improve longevity.

White meat is just as bad as red meat in terms of cholesterol
Experts issue a terrifying warning, it's time to cut red meat
This new study explains how red meat can damage the heart and kidneys