American honey still contains traces of Cesium 137, a remnant of nuclear tests conducted at the time of the Cold War 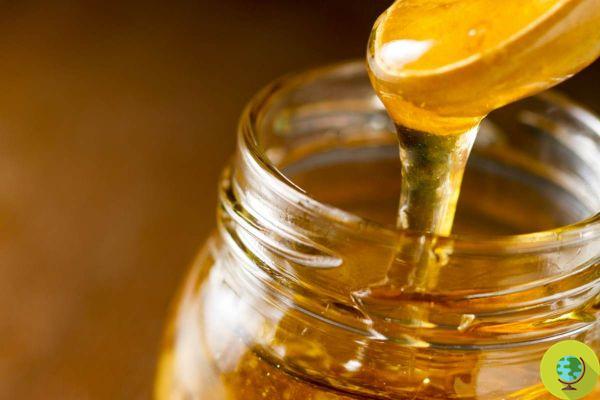 In US honey there are still traces of Cesium-137, a radioactive isotope produced by nuclear tests conducted during the Cold War

Honey produced in the USA still contains radioactive residues that derive from nuclear tests conducted in the 50s and 60s, at the time of the Cold War. This was revealed by a new study that specifies, however, that there are no health risks.


Human actions can have long-term repercussions on the planet, an example for all are the consequences of the use of nuclear power (today it is 35 years since the Chernobyl disaster and the terrible effects are still there for all to see).

But have you ever thought that radioactive residues could also be found in honey?

This is what a new study has discovered that reveals that American honey still contains radioactive traces deriving from nuclear tests conducted decades ago. Scientists from the William & Mary College who led the study managed to find the radioactive isotope Cesium-137 in a series of US honey samples.

Cesium-137 is a byproduct of fission launched by hundreds of nuclear tests several decades ago. In the wake of World War II, the United States, the former Soviet Union and other countries detonated hundreds of nuclear bombs that expelled cesium into the upper atmosphere. The winds then dispersed it almost everywhere before the microscopic particles settled on the ground, especially through the rain.

The spread was not uniform and particularly affected the east coast of the United States.

Cesium-137 has a half-life (time in which half of the initial mass decays) of 30 years but still today there are traces in circulation in the environment. Cesium, by the way, is soluble in water and plants can mistake it for potassium, a vital nutrient. Not surprisingly, the most contaminated honey samples were those from areas where the soils were poorer in potassium, which prompts the plants to absorb more Cesium-137.

Just to see if and to what extent plants still continue to absorb this nuclear contaminant today, James Kaste, a geologist at the College of William & Mary in Williamsburg, Virginia, assigned his college students a task: to bring back local foods from places. of their spring break to test the level of Cesium. Surprisingly, a sample of honey had 100 times more traces than other foods.

It was therefore decided to carry out a specific test on honey and 122 samples were used, all from the eastern United States.

The results revealed that, thousands of kilometers from the nearest bomb site and more than 50 years after its use, the fallout is still affecting plants and animals.

The traces of the radiative isotope were evidently absorbed by the bees who then inevitably transferred them to honey.

68 of the 122 American honey samples analyzed contained Cesium-137 but at levels well below those considered harmful by US FDA guidelines. However, this is a fact that makes us reflect on how much the radioactive fallout can persist in the environment.

And, while radioactivity levels aren't dangerous today, they may have been much higher in the 70s and 80s, the researchers say. A period in which, with great probability, radioactivity was still harmful to bees and to those who consumed their honey.

Incidentally, the findings raise questions about a possible impact of cesium on bee health over the past half century, said Justin Richardson, a biogeochemist at the University of Massachusetts, Amherst.

The new study hasn't raised any alarms about honey consumption today but, as Thure Cerling, a geologist at the University of Utah said, it can still be very useful:

“Understanding how nuclear contaminants move is still vital for measuring the health of our ecosystems and our agriculture. We have to pay attention to these things "

The results of the study were published in Nature Communications.

add a comment of American honey still contains traces of Cesium 137, a remnant of nuclear tests conducted at the time of the Cold War