Also Findus lasagna in the horse meat scandal in Britain

Horse meat in lasagna. It is a scandal in Great Britain, where horse butchers have always been absent due to the particular love and respect for horses by the British. Horse meat is a taboo ingredient in Britain. For this reason, Findus hastened to withdraw its lasagna from sales, with reference to products in which, following specific tests, large quantities of horse meat were detected.

Horse meat in lasagne. IS scandal in Great Britain, where horse butchers have always been absent due to the particular love and respect for horses by the English. In Great Britain the horse meat it's a taboo ingredient. For this reason, Findus was quick to withdraw its lasagna from sales, with reference to products in which, following specific tests, large quantities of horse meat were found.

British grocery chains Tesco and Aldi have withdrawn from their shelves i Findus brand frozen products containing horse meat, with particular reference to lasagna and spaghetti Bolognese. The chain stores have not limited themselves to the withdrawal of Findus brand products, but have also turned to ready-made and frozen meals made in the same establishment.

I suspect that products sold as containing beef however, presented horse meat among their ingredients, he pushed theFSA (Food Safety Authority) ad ordinare specific tests in order to verify the quantities of horse meat used in the preparation of ready meals. From the analyzes conducted on the Findus brand lasagna, it emerged that the meat contained in them, for a percentage included between 60% and 100%, came from equines.

FSA member Catherine Brown described the incident as most likely related to intentional fraud or to others criminal activities, rather than as the result of a contamination that occurred by mistake. The FSA was responsible for testing 18 Findus-branded products sold as beef-based lasagna. 11 of them had a content of horse meat higher than half of the meat used, which could also touch all of the same, in cases where the beef had been completely replaced with horse meat. 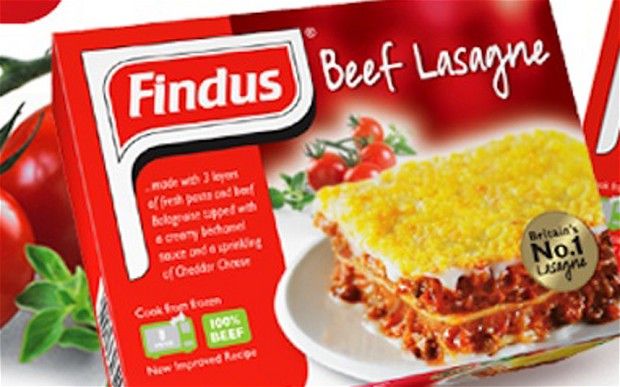 Findus thus began withdrawing le lasagna of 320, 360 and 500 grams, after that Comigel, the French factory that had taken care of their production, had declared them as not in accordance with specifications. The presence of horse meat in the products would not have been declared among the ingredients indicated on the label.

It is suspected that the horse meat used in the production of the food under accusation came from criminal and fraudulent activities. In particular, there is concern that the meat used may contain a medicine administered to animals by veterinarians such as anti-inflammatory, the presence of which is strictly prohibited in food products, due to risks to human health. This substance is called fenilbutazone. The FSA has required all companies producing foods containing beef, such as hamburgers, meatballs and lasagna, to carry out specific tests in this regard. The police will investigate the presence of criminal fraud. The results of the tests must reach the authorities by next February 15th.