Eternal plastic? Actually maybe not, but it's far from good news. From a study conducted by Florida Atlantic University (USA) it emerges that about 98% of plastics that arrive in the oceans are degraded by sunlight, breaking down into much smaller parts whose fate and above all whose effects are not yet known (which does not make you feel safe at all).


Contrary to what one might think, despite the fact that an immense accumulation of plastics in the sea is known, this represents just 1-2% of the inputs of plastic debris in the seas: what happens to the remaining 98% and especially theimpact on marine life remains largely a mystery.

Researchers selected plastic polymers that are most frequently found on the ocean surface and irradiated them for about two months using a solar simulator system, recording the dissolution kinetics of the plastic, and then evaluated the physical and chemical photodegradation of these materials by analyzing the samples after irradiation using established techniques.

In particular, post-consumer microplastics were analyzed from plastics such as a shampoo bottle and a disposable lunch box (made of polyethylene, polypropylene and expanded polystyrene), as well as standard polyethylene and plastic fragments collected from the surface waters of an area of ​​the 'Pacific Ocean: a total of 480 pieces of each type of polymer were chosen at random, weighed and divided into two groups.

With surprising results: simulated sunlight increased the amount of carbon dissolved in the water and fragmented even the smallest particles, changing their chemical structure. It also chopped, oxidized and altered the color of the irradiated polymers. 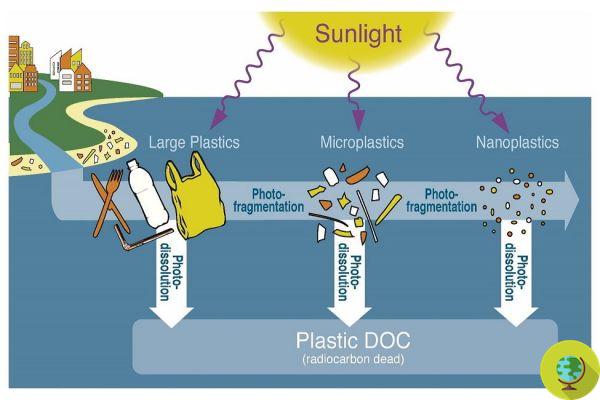 The speed of these reactions depends on the starting plastic: recycled plastics have degraded more rapidly than polypropylene, typical of consumer product packaging, and the polyethylene of which plastic bags, films and containers are made, including bottles.

By extrapolating, that is, assuming a "regular" (linear) trend of the degradation rate, the researchers calculated that in real conditions recycled plastics take 2,7 years to degrade, polypropylene 4,3, polyethylene 33 while the standard polyethylene used for crates, trays, milk bottles, fruit juices and caps for food packaging uses 49.

"For more photoreactive microplastics such as expanded polystyrene and polypropylene sunlight can quickly remove these polymers from ocean waters - spiega Shiye Zhao, senior author of the work - Other less photodegradable microplastics such as polyethylene could take decades or centuries to degrade even if they remain on the sea surface. Furthermore, when these matters dissolve in the sea, they release biologically active organic compounds, which are measured as dissolved organic carbon, an important by-product of sunlight-induced plastic degradation ”.

Nothing is created and nothing is destroyed, but everything is transformed. The problem is understanding in what.

“The possibility that plastic releases bio-inhibitory compounds during photodegradation in the ocean could affect the productivity and structure of the microbial community, with unknown consequences for ocean biogeochemistry and ecology - warns Zhao - One of the four polymers in our study had a negative effect on bacteria".

More research is needed to determine whether the release of these compounds is a common or rare phenomenon, the researchers point out, but the study, by itself, sets a new alarm on the massive use of plastics, already known to cause enormous environmental damage.

We need to other alarms before taking a decisive step?

The work was published on Journal of Hazardous Materials.

That huge hole in the heart of the Antarctic ice ❯