Almonds make you lose more weight than expected: our body absorbs 20% less of its calories 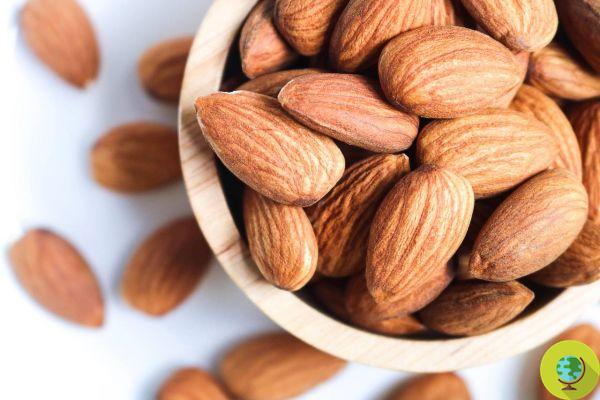 Is a calorie always a calorie? Not when it comes to almonds. In fact, new research has found that in the case of this dried fruit there is a big difference between the calories ingested and those actually absorbed by the body.


There is good news for almond lovers. Dried fruit is generally considered a snack on the one hand satiating on the other rich in calories, now a new research, published in Mayo Clinic Proceedings, reveals an interesting peculiarity of almonds.

In this case we are not discussing the benefits, widely recognized together with those of walnuts as vegetable sources of proteins, vitamins and minerals, but of the caloric intake, an important feature especially for those who need to lose weight or want to maintain their weight.

Well, a research team from the University of Toronto found that after digestion about 20% of the calories, derived largely from the fat present in almonds, they are not absorbed by the body. This translates into about 2% less energy absorbed from the overall diet among study participants.

In order to state this, the research selected 22 people (both men and women) with high cholesterol levels and who, because of this, had to stay on a diet. All study participants consumed an NCEP Step-2 diet (low in saturated fat and cholesterol, part of the U.S. National Cholesterol Education Program).

Three dietary interventions carried out for a month by each participant with a week off between one and the other: full-dose almonds (75 grams per day or three quarters of a cup); half a dose of almonds plus half a dose of muffin; and full-dose muffins as a study control. The nutritional composition of the muffins matched the almonds in the amount of protein, fiber and fat.

It was thus discovered, through analyzes carried out on the foods used and on the feces of the participants in the study, that not all the calories of almonds are actually metabolized by the body.

The study concluded that a person who eats the same amount of almonds in a daily diet of 2.000 to 3.000 calories would absorb 40 to 60 fewer calories than predicted by the Atwater factors, upon which many food labels are based. This could result in weight loss of up to 2,9 kilograms in one year, assuming there is no compensation in the form of increased intake or decreased energy expenditure.

One more reason to add almonds to our daily diet more often.

Read all of our articles on almonds

Surgical masks can be washed and reused up to 10 times, science confirms ❯

add a comment of Almonds make you lose more weight than expected: our body absorbs 20% less of its calories