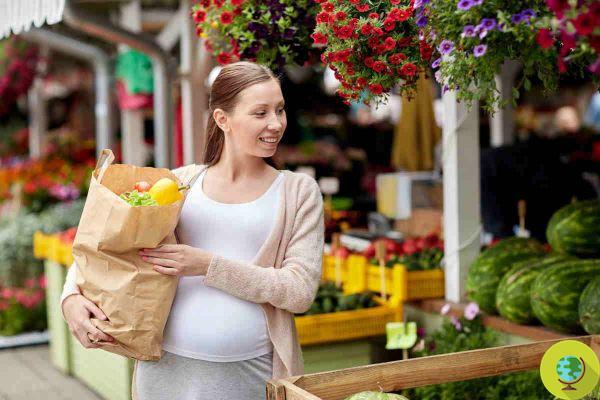 In pregnancy, it is better to carefully consider all the foods that it would be good to exclude or limit in your diet.

Bacteria, parasites and viruses can threaten the health of a pregnant woman. Is it a risk you know? Sure, but it's good to take it into account from the first moment you know you're expecting a baby. What should make you rest assured, however, is that it is an “easily” circumventable danger if you carefully consider all the foods that it would be good to exclude or at least limit in your diet.


Finally set aside the myth that in pregnancy you have to eat for two (it is now established that this is not true at all since, especially in the first months, the extra calorie intake needed is very low and throughout the period of pregnancy it oscillates between 200 and the 450 kcal), what you will need to do, however, is to calibrate all the useful nutrients over the 9 months at best: carbohydrates, proteins, good fats, vitamins, mineral salts, and ensure the right amount of fiber, essential to avoid the classic problem of constipation in pregnancy.

No raw meat or badly washed vegetables, the gynecologist will tell you, green light, instead of whole grains and foods rich in iron and Omega 3.

Foods to avoid during pregnancy

If you have never contracted toxoplasmosis in the past, it is best to avoid raw foods of animal origin, as well as unwashed fruit and vegetables. Also avoid the consumption of fish with high mercury content, such as tuna - canned and fresh - and swordfish, but also farmed salmon.

White rind cheeses such as brie, camembert or taleggio should also be avoided, but also the so-called blue cheeses such as gorgonzola and roquefort, unless they are cooked. Better to stay away from fontina too, from all other unpasteurized cheeses and dal raw milk. Avoid alcohol altogether and do not overdo it with caffeine and the products that contain it, with salt and with foods that are too high in fat or fried.

Ultimately, particular attention should be paid to:

Eating undercooked or raw meat increases the risk of infection with various bacteria or parasites, including Toxoplasma, E. coli, Listeria, and Salmonella. To avoid:

Fish itself is a wonderful good food: it contains good proteins and omega-3 (omega-3) fatty acids, which are important for the development of the baby's brain and eyes. However, some types of fish should not be eaten, those most considered a risk of mercury contamination, because this substance has been linked to possible developmental damage, with particular reference to the brain, for the unborn child.

But also beware of other types of fish, such as farmed salmon. In addition, raw seafood should also be avoided in pregnancy due to possible bacterial contamination and the risk of contracting toxoplasmosis or salmonella.

Raw eggs and any other raw food that contains them should not be consumed to avoid the risk of exposing yourself to a salmonella infection. So pay attention also to mayonnaise and other fresh egg-based sauces prepared at home and creams and desserts prepared only with a short cooking such as mascarpone, tiramisu, custard, homemade ice cream, creme brulé and zabaglione.

To be consumed with attention white rind cheeses:

Attention also to unpasteurized cheeses such as fontina. All other cheeses, if pasteurized, shouldn't cause problems.

Always wash and rewash all fruit and vegetables with extreme care, including salads in bags. Fruits and vegetables must always be washed extremely carefully in order to avoid toxoplasmosis.

Caffeine is absorbed very quickly and passes easily into the placenta. Because babies and their placenta don't have the main enzyme needed to metabolize caffeine, high levels can build up. High caffeine intake during pregnancy has been shown to limit fetal growth and increase the risk of low birth weight at delivery.

Drinking alcohol during pregnancy can also cause fetal alcohol syndrome, which could lead to facial deformities, heart defects, and intellectual disabilities.

Everything in it substances such as aspartame, the consumption of which in pregnant women has been linked to the possibility of damage to the development of the unborn child, should be avoided. Therefore, go for natural sweeteners such as stevia. Also off your tables are foods rich in salt and foods that are too high in fat or fried.

In summary, if you are expecting a baby, avoid:

Read all our articles on the pregnancy.