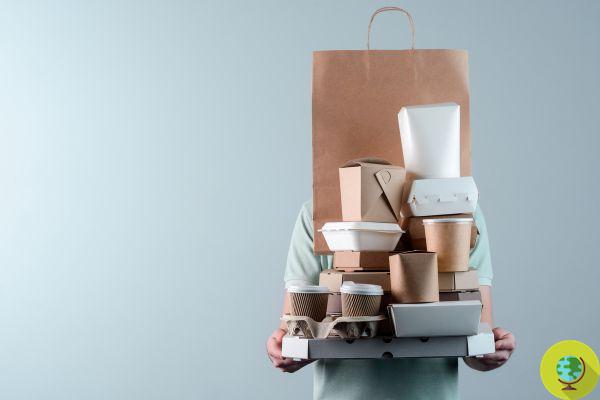 The food delivery industry has a strong environmental impact, but the climate crisis also has an impact on the sector. How?

When the outside air is particularly polluted, employees are more likely to order food delivery than to go out for lunch, which in turn increases plastic waste from food packaging. It is the result of a new disconcerting study that focuses on food delivery, recently considered - and not only in offices - the last frontier of fast food. It is also dangerously encouraged with the recent anti-Covid measures.


Conducted by some researchers of the National University of Singapore (NUS) and published in the journal Nature Human Behavior, the research assumes that the food delivery industry inevitably has a strong environmental impact, particularly due to its current use of plastic packaging. At the same time, the climate crisis would have an impact on the sector. How?

The researchers aim to show that air pollution is a factor that would result in increased consumption of food at home in the developing urban world.

"Our hypothesis is that people are more likely to order food delivery when their personal cost of exposure to the outside environment increases," the study reads. We interviewed employees in three Chinese cities and found that a 100 μg m - 3 increase in particulate matter pollution (PM2,5) increased the propensity to order food delivery by two-fifths of the sample average. We used photographic evidence to quantify disposable plastic in meal delivery. Data from an online delivery platform with a large customer base indicates a minor, but nonetheless substantial, causal link between air quality and food delivery. Overall, the control of air pollution brings benefits to plastic waste ”.

A sort of dog that bites its own tail, in short, between disposable plastic in the meals delivered, from containers to shopping bags, which pollutes the environment even more.

Associate Professor Alberto Salvo of the Department of Economics at the Faculty of Arts and Social Sciences of the NUS and author of the study, stated from the pages of Phys:

“Plastic waste is a growing global environmental concern. While we see more research into the impact plastic pollution is having on the natural environment, there has been less work trying to understand the human behavior that drives plastic pollution. This is where our study tries to contribute, finding a strong causal link between air pollution and plastic waste through the demand for food delivery ”.

The NUS team focused their study on China, which is among the world's largest users of online food delivery platforms, with 350 million registered users. It is estimated that 65 million meal boxes are discarded every day in China, with employees contributing more than half of the demand.

The study repeatedly examined the lunch choices of 251 employees (each worker for 11 working days) over time in three often smog-filled Chinese cities - Beijing, Shenyang and Shijiazhuang - between January and June 2018. To complete the employee survey , the researchers also had access to the Beijing 2016 order register of an online food delivery platform, which broadly represented all market segments served by the food delivery industry, collecting observational data on 3,5 million orders. of food delivery by about 350 thousand users.

The survey and order book data were then compared with PM2,5 measurements (fine particles less than 2,5 micrometers in diameter) during lunch periods by the air monitoring network in all three cities. It was observed that PM2,5 levels during these periods were often well above the US 24-hour national ambient air quality standard of 35 μg / m³, making the pollution highly visible.

Both data sources indicated a strong link between PM2,5 pollution (haze) and home food consumption. Correcting for weather and seasonal influences, the company's order book revealed that a 100 μg / m³ increase in PM2,5 increased consumption of food deliveries by 7,2%. The impact of a PM2,5 shift of 100 μg / m³ on employees' propensity to deliver orders was six times greater, at 43%.

“In the face of smog or haze outside - explains Associate Professor Chu of the Marketing Department of the NUS Business School - a typical lunchtime employee can avoid exposure only by ordering food”.

Based on the order book, the researchers also estimated that on any given day, if all of China were exposed to a 100 μg / m³ dose increase of PM2,5, as is regularly observed in Beijing, they would be delivered. 2,5 million more meals, requiring an additional 2,5 million plastic bags and 2,5 million plastic containers.

"Our findings probably apply to other cities in typically polluted developing countries, such as Bangladesh, India, Indonesia and Vietnam," said Liu of the Department of Economics. Waste management practices vary widely, with the wind blowing plastic debris from uncovered landfills, or the plastic being thrown into rivers and from there into the ocean. So, with eight million tons of plastic estimated to enter the seas every year, our study speaks of a larger problem ”.

Going forward, the researchers will continue to work on the behavioral feedback through which pollution generates pollution and, as a recent example, note how concern about exposure to Covid-19 (but also restriction measures) has led to a growing demand for home delivered meals that are predominantly packaged in plastic.

We therefore hope that at least this work will add to the voices that require more environmentally friendly packaging and better waste management.

Take-away containers for compostable foods: safety that does not pollute the environment

Pollution exposes the elderly to a greater risk of depression and cognitive decline. I study ❯