A 2020 study shows the alleged correlation between deforestation and the incidence of hantaviruses and other zoonoses in populous Brazil.

Do not store avocado like this: it is dangerous The health of living beings, which obviously also affects human well-being, is inextricably linked to environmental health. If further pandemics, epidemics and zoonoses are to be avoided in the future, action must be taken as soon as possible to defend and protect the natural ecosystems of our planet, including the Brazilian Atlantic forest, where zoonotic diseases such as hantavirus are at risk of exploding. From a scientific article published in August 2020 in the journal Science of the Total Environment signed by a group of Brazilian scholars (Paula Ribeiro Prist et al.), It appears that the transmission ofhantavirus, a high-mortality infection that spreads through human contact with pest rodents, could be reduced by 45% if Brazil restores its Atlantic forest to levels required by the Native Vegetation Protection Act (BNVPL - Native Vegetation Protection Act - Law No. 12.651 / 2012).

In a nutshell, hantavirus - which is transmitted to humans by direct contact with the feces, saliva and urine of infected rodents or by inhalation of the virus through rodent droppings - would spread more rapidly when forests have been cut down and populations of rodents are numerically high.

Although the simulations proposed in the aforementioned study have yet to be confirmed by adequate field research, these first scientific data show that the reduction of the risk of zoonotic diseases could be favored by the restoration of forest cover.

Without a doubt, the current one COVID-19 pandemic has once again brought to public attention the danger of zoonotic diseases, although zoonoses - that is, diseases transmitted by contact between humans and animals - have always represented a threat to world public health.

According to the aforementioned Brazilian scientists, therefore, the ongoing deforestation in the country would be positively correlated to the increased risk of zoonotic diseases. With the progressive loss of the natural habitat, in fact, the ecological dynamics (including the predator-prey dynamics) would no longer be so effective in fighting or regulating diseases.

Another study conducted three years earlier by Paula Ribeiro Prist, a researcher at EcoHealth Alliance, a non-profit organization based in New York, had already highlighted that forest restoration could be a suitable strategy to protect us from zoonotic diseases.

Prist further stated, in reference to the 2020 research, that:

As already mentioned, simulations conducted by Prist and his colleagues led to the conclusion that the restoration of the Atlantic Forest of Brazil could mitigate the risk of contracting the hantavirus cardiopulmonary syndrome, a highly lethal zoonotic disease. In their opinion, massive reforestation work could help reduce the populations of small mammals that carry the disease.

The study emphasizes that disease transmission increases when carrier rodent populations are large and population density is high; furthermore, transmission rates increase proportionally as local temperatures rise, and this happens precisely when forests are cleared and deforested. The increased prevalence of hantavirus in rodents may therefore be an epidemic risk factor for neighboring populations.

Although hantavirus is highly lethal to humans, transmission between individuals is quite rare. Although it is unlikely that it will give rise to a global pandemic such as that of COVID-19, this disease can still have devastating effects in peculiar regional and local contexts.

To investigate how and to what extent forest restoration could affect the prevalence of zoonotic disease, Prist and colleagues compared some datasets on rodent abundance in both wooded and cleared areas across the Brazilian state of Sao Paulo.

The team used this information to estimate the degree of prevalence of hantavirus at present compared to what it would be with the levels of forest cover restoration required by the Brazilian Native Vegetation Protection Act.

The latter is less stringent than the old forestry code Brazilian, introduced for the first time in 1965. The old code guaranteed the conservation of forests and other forms of natural vegetation in areas considered essential, such as, for example, those close to sources and along the banks of rivers. That revolutionary legislation also required landowners to preserve a certain percentage of forest land.

In 2012, however, the Brazilian government's policies had already changed and the new forestry code ended up losing that initial vocation. The Brazilian Native Vegetation Protection Act (BNVPL) has conveniently maintained the destination of a minimum area of ​​native vegetation on private land, but, at the same time, has considerably weakened the guidelines of the old forest code, legitimizing an uncontrollable push to deforestation, still encouraged by the Bolsonaro presidency.

Why protect the Atlantic forest 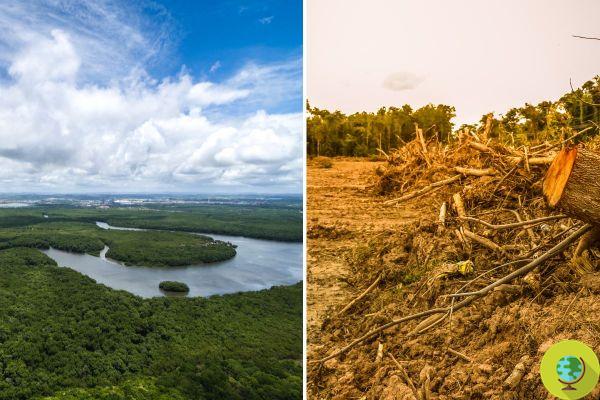 La Atlantic forest of Brazil it is an ecosystem of global significance because it has not only a high biodiversity, but also a great potential for carbon storage.

The growing anthropogenic pressure exerted on this ecosystem over the centuries, however, has not benefited the Atlantic forest at all. Before the arrival of the Europeans 500 years ago, the Atlantic forest extended over 150 million hectares in what is now eastern Brazil, an area almost equivalent to the surface of Mongolia. The once massive Atlantic forest has lost more than 90% of its native forest cover. That vast territory is home to over two-thirds of the Brazilian population and includes the megacities of São Paulo and Rio de Janeiro.

Forest recovery is now an important goal, set on a global scale to combat climate change, save species and improve the lives of local communities whose survival depends on the forest.

In particular, the so-called Bonn Challenge, launched by Germany and the IUCN in 2011, aims to restore 350 million hectares of forest by 2030 through the voluntary membership of participating countries.

The Amazon will collapse by 2064 (and it will be a catastrophe for everyone). The scary new studio

Deforestation has destroyed 18% of the Amazon in 8 years, an area the size of Spain. I study

A strange effect of aspirin can help protect against air pollution ❯