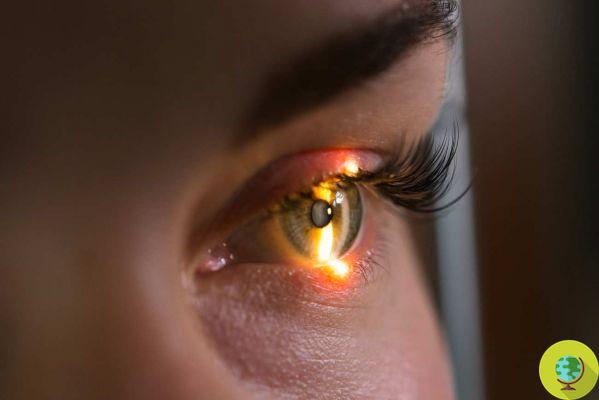 The authors of this study hope that in a few years a simple eye exam will be enough for the early diagnosis of Alzheimer's.

THEAlzheimer it is an insidious pathology that develops in a latent way: it can take years before i symptoms begin to manifest, even if the person is in fact already ill. Discovering new early detection methodologies can help treat the disease effectively from its earliest stages, before cognitive decline gets out of control.


A new study has shown thatthinning of the retina it would be linked to cognitive performance and, therefore, could represent an effective indicator of the possible development of neurodegenerative diseases, such as Alzheimer's or dementia. This surprising discovery could pave the way for new early diagnosis methods: in a few years, a simple eye exam could be enough to check for conditions of cognitive decline.

Given that we have not been able to cure advanced Alzheimer's and the global prevalence of the disease is increasing, being able to identify people in the preclinical stage, when we may still have a chance to intervene, is really important. researcher Ashleigh Barrett-Young, author of the study.

The study, conducted in New Zealand, processed data from the Dunedin archive, which contains information on children born in the early 70s. Fifty years after birth, a subgroup of the Dunedin sample (865 male and female adults) underwent an eye scan and some neuropsychological tests; on this occasion the thickness of two different points of the ocular retina was also measured, namely the layers of retinal nerve fibers and those of ganglion cells.

(Also Read: Dementia: This Diet Can Reduce Alzheimer's Risk By More Than 50% According To One Study)

Test results showed that participants with a thinner retina were also those who scored lower on cognitive tests - although no association has yet been found between retinal thinning and decline in cognitive performance. between childhood and adulthood: the thinning of the retina seen in middle age could also be linked to general aging of the organism and not necessarily to a form of pathological cognitive decline.

In short, a thinner retina could be an indicator of the general health of the brain, and there are already numerous studies that confirm this connection between the eye and the brain: a study conducted in 2018 on healthy adults with dementia showed that an abnormal thinning of the retina may precede cognitive decline and dementia diagnoses.

However, these are still conflicting results and not a direct consequence of thinning and diagnosis. Further studies are needed to better understand the process and understand if the thinning of the retina is always the prelude to Alzheimer's or if it can also be connected to other pathologies or particular lifestyles.

A zero waste restaurant? Hannah Bretzel tries it out by choosing composting ❯