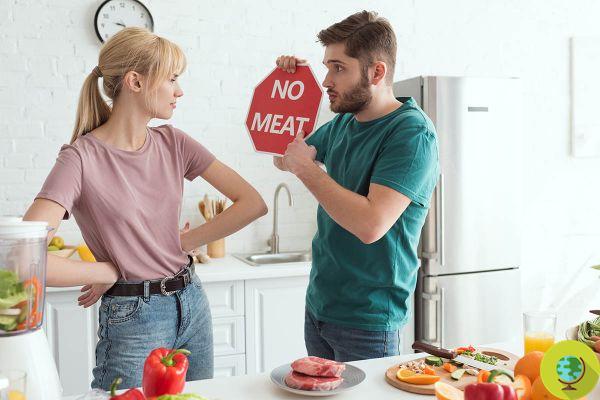 A plant-based meal company is looking for a committed carnivore willing to go vegan for 3 months. The salary is 50 pounds!

Are you firmly convinced that you need meat in your life? Do you eat meat three times a day, seven days a week? Can't imagine a life without this food? You could be the chosen one who will earn 50 pounds to radically change their diet for at least 3 months.


This is the curious announcement published by Vibrant Vegan, a company that produces vegan meals, which is looking for a new "Vegan Curious Coordinator”A role for which he offers a considerable amount, but only on condition that he transforms himself, for at least 3 months, from a convinced carnivore to a genuine vegan.

If you were giving us a little thought, however, we must immediately give you bad news, the search is valid in the UK only.

The selected person will have to sign a contract in which they will undertake not to consume any animal products for 3 months, also encouraging others to follow a vegan diet via social media posts.

As it can be difficult to know where to start when going vegan, the company will provide the winning candidate with unlimited meals, a nutritionist always on hand to make sure he is following his new diet as best as possible, and even a chef to ask for advice.

In practice, the person who will be chosen will have to try and test vegan products from the point of view of a devoted carnivore and share your thoughts and considerations, as honest as possible.

At the end of the period it will be asked if the person intends to remain vegan for the rest of 2021 and, if so, Vibrant Vegan will provide plant meals worth 100 thousand pounds, always provided that everything is demonstrated through social posts and a specific one. food diary.

The idea of ​​finding a Vegan Curious Coordinator was born following a survey carried out online on 1500 people which found that 34% of them were a 'curious vegan', that is, they would gladly approach the 100% vegetable diet, at least for curiosity.

In addition, Google Trends has found that searches on vegan themes and recipes are now three times more frequent than in 2017, with a peak being reached during the Veganuary each year.

"At Vibrant Vegan we want to demonstrate not only the health and environmental benefits of being vegan that we hear so much about, but also highlight that vegan food can and should be enjoyed by everyone, even the greatest meat lover. of the United Kingdom ".

The winning candidate will be selected on January 25 and from February 1 will have to become fully vegan.

This is not the first time such a request has been made, as early as last August, the British website VeganLiftz was offering 2000 pounds to become vegan for one month. Even in that case it was necessary to undergo a selection that would have identified the most suitable people among the most convinced carnivores.