When you choose to become vegan, what you embrace is not just a diet but a philosophy of life, which implies the elimination of all those products that require the presence of ingredients or additives of animal origin. What not everyone knows, however, is that many common products contain unsuspected "enemies". Here are 5 ingredients and additives of animal origin to avoid.

When you choose to become vegan, what you embrace is not just a diet, but a philosophy of life, which implies the elimination of all those products that require the presence of ingredients or additives of animal origin. What not everyone knows, however, is that many common products contain unsuspected "enemies". Here are 5 ingredients and additives of animal origin to avoid.

The E120 (cochineal) is a natural dye obtained from the dried body of some insects (Coccus Cacti) which feed on plant sap. This red colored substance (also called Carmine) is present only in females and reaches its maximum concentration in pregnant ones. Insects are raised naturally on the blades of prickly pears and the females are collected (by detaching them with metal sheets) shortly before the laying of the eggs, and dried. From their body is extracted the dye that can be used in dry cleaners, in the confectionery industry, for the coloring of liqueurs or red (or dark orange) drinks and ink and in cosmetic products.

While some argue that much of the E120 today is synthetically produced, there is no evidence that this matches the hard facts. Indeed, these insects seem in high demand by the industry like dye, and there are even countries in which the breeding of cochineal is widespread: Peru (producer of 85% of cochineal worldwide), the Canary Islands and southern Spain are at the top of the production. E120 is also found under the name of carmine or carminic acid. 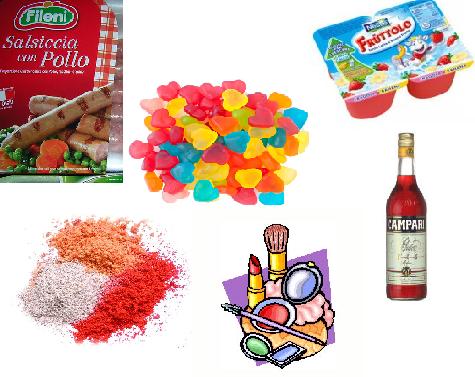 Il bone phosphate is an additive derived from remains of the bones of the carcasses of slaughtered animals, such as cows and pigs. Bone phosphate can be used as an anti-caking agent, but also as a source of phosphorus in food supplements. The main use is in the cosmetic sector, where it is used for example in some toothpastes.

Shellac is a brittle and scaly insect secretion of the order of hemiptera Kerria lacca, present in the forests of Assam and Thailand. It has been used since the mid XNUMXth century to produce small items such as frames, boxes, toiletries, jewelery, inkwells and even dentures. Being edible, shellac has been used as a polishing agent for pills and candy. For this purpose, it is classified as a food additive with number E904 and is still used as a coating for fruit to prevent spoilage after harvesting.

The mono and diglycerides of e471 fatty acids can be obtained from low-quality vegetable oils, such as coconut oil and palm oil, but also from animal waste from slaughter, such as horns, nails and fat. Since only manufacturers can provide detailed information on their origin, vegetarians and vegans prefer to avoid them. They are indicated with the initials E471.

To take this substance, beavers are trapped and then, at best, sedated, or killed. The castoreum, in fact, is found in the glandular bag of the beaver, between the anus and the base of the tail. In Europe it is only used in some perfumes, while in the USA it is also approved as a food additive. On the labels, however, it is simply defined as “natural flavor.

7 food additives and substances to avoid

7 ingredients of animal origin that are hidden in common products

5 foods to never heat in the microwave ❯

add a comment of 5 additives of animal origin: the cruelty you do not expect