10 foods to avoid during pregnancy 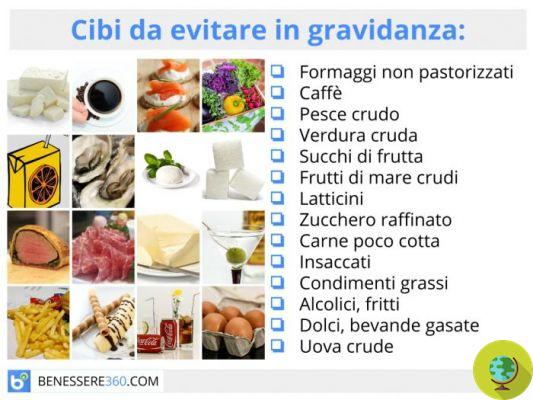 Women who are expecting a baby should take extreme care of their diet, in order to guarantee themselves and the unborn child a correct supply of nutrients and energy. They will have to carefully consider which foods it would be good to exclude or limit in their diet to avoid the possibility of contracting infections that are harmful to themselves and the baby.

Le women who are expecting a baby they should pay close attention to their diet, in order to ensure a correct supply of nutrients and energy for themselves and the unborn child. They will have to consider carefully which foods should be excluded or limit within your diet to avoid the possibility of contracting infections that are harmful to themselves and the baby.

We propose some guidelines of eating behavior that they may be part of what your doctor tells you during pregnancy, regarding the foods to be excluded from the diet or to be consumed with caution.

Rare steaks, undercooked poultry, fresh pate, but also raw seafood should be avoided in pregnancy due to any bacterial contamination and risk of being able to contract toxoplasmosis or salmonella. Attention also to sushi, sashimi, raw fish and fish preserved raw or only partially cooked, but also to oysters and other raw shellfish.

With particular reference to raw meats preserved or only partially cooked. The risk is that they can be contaminated by the bacterium responsible for listeriosi, an infectious disease that could cause inconvenience to the unborn child.

The fish species most considered a risk of mercury contamination should be avoided as this substance has been linked to possible developmental damage, with particular reference to the brain, for the unborn child. Among them we highlight: swordfish, tuna, eel, blue shark. Also beware of other types of fish, which could be contaminated due to water pollution in some areas, such as trout and salmon.

Raw eggs and any other raw food that contains them should not be consumed to avoid the risk of exposure to a salmonella infection. So pay attention to mayonnaise and other fresh homemade egg-based sauces and a creams and sweets prepared only with a short cooking time such as mascarpone, tiramisu, custard, homemade ice cream, creme brulé and zabaglione.

To be consumed carefully due to the possibility of contract listeriosis in case of contamination. White rind cheeses can include: brie, camembert and taleggio. The risks decrease if they are part of the ingredients of hot dishes for which a long cooking is foreseen.

We refer in particular to gorgonzola and roquefort, which should be consumed exclusively in dishes that require a long cooking. Attention also to unpasteurized cheeses such as fontina. All other cheeses, if pasteurized, shouldn't cause problems.

Il unpasteurized milk it could be a vehicle for the listeria bacterium. The consumption of raw milk it is usually forbidden for pregnant women, who, if they decide to drink milk, should only go for pasteurized milk.

Il alcohol consumption, even in small quantities, it could interfere with the development of the unborn child and prove harmful even after birth, during breastfeeding, a period in which its intake should be avoided. Caffeine should be avoided or consumed in extreme moderation. Excessive caffeine consumption has been associated with premature births and the possibility of miscarriage.

Attention to fburp and vegetables not well washed, including that packaged and declared ready for use. Fruits and vegetables must always be washed extremely carefully in order to avoid rrisk of contracting toxoplasmosis.

They should be avoided absolutely artificially sweetened foods and drinks using substances such as aspartame, the consumption of which in pregnant women has been linked to the possibility of damage in the development of the unborn child, with particular reference to damage to the brain in the areas dedicated to learning and hormonal control. Better to opt for natural sweeteners like stevia.

10 foods and drinks to prepare at home to cool down ❯

add a comment of 10 foods to avoid during pregnancy